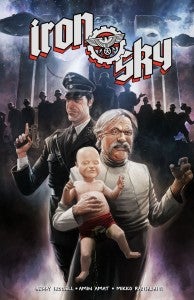 IDW Publishing announced today that Iron Sky, the crowd-funded sci-fi action film that saw Nazis escape to the moon following their defeat in World War II, which of course makes them a spacebound problem for the rest of us later. "The graphic novel is a prequel to the hit sci-fi action film Iron Sky produced by Blind Spot Pictures, and focuses on how the Nazis ended up on the moon, and how Udo Kier's character, Wolfgang Kortzfleisch, became Der Überführer." explained lead artist Gerry Kissell, who will work on the book with Amin Amat. "Part steampunk and part comedy, the graphic novel was written masterfully by Alan Wake scribe, Mikko Rautalahti. who has a wicked sense of humor." The book will be 104 pages, with 67 pages of comic art with an additional 33 pages of production art, behind the scenes bonus material, and other exclusive material written by the film's director, Timo Vuorensola.