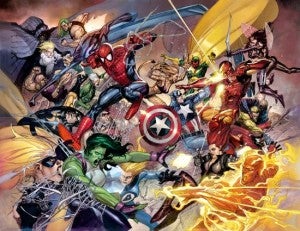 At the MTV Movie Awards, Joss Whedon faced the unavoidable Avengers 2 questions from the press. For the most part, Whedon kept things pretty generic talking about the sequel being both fun and a lot of work. When The Hollywood Reporter asked Joss Whedon what the Avengers would be up against in the sequel, Whedon provided an answer that might at first sound vague, but actually could be very revealing. Whedon replied, "Themselves, because we're all our own worst enemy." Of course, superheroes fighting themselves is the basis of the popular Civil War storyline in the comic books. Could Joss Whedon be planning to pit the Avengers against each other in Avengers 2? There is a big reason that Disney might want to go that route. As a general rule, superhero merchandise sells better than supervillain merchandise. Iron Man 3 features a whole army of Iron Man suits, which means a whole army of toys to be sold. If the Avengers fight each other rather than a single villain, it could justify including twice as many superheros in the film (and twice as many toys to sell).

Is Avengers 2 Going To Be Civil War?