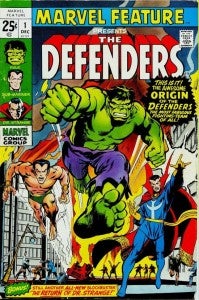 With the revelation that Marvel Studios has a movie plan in place through 2021, it raises the question of just what Marvel Studios might be building toward next. During Phase One, Marvel Studios assembled the Avengers by first introducing them in their own standalone movies. When The Avengers team came together in their own movie in May 2012, the film shattered the opening weekend domestic box office record with an amazing $207 million. The Avengers went on to rack up more than $1.5 billion at the worldwide box office, becoming the third highest grossing film of all time. The Avengers success sent a message to Marvel Studios owner Disney that there is money to be made in superhero team movies. During Phase Two, Marvel is once again assembling the Avengers, plus launching Guardians Of The Galaxy as a fully-formed team right out of the gate. Now, the big question becomes what will Marvel Studios do in Phase Three and Four to try to recreate the magic of The Avengers, while also keeping things fresh and new. After The Avenger trilogy are there more team movies in Marvel Studios future? Well, Marvel Studios President Kevin Feige has already publicly hinted at an Inhumans movie, which will be launched as a fully-formed team just like Guardians Of The Galaxy. However, we've heard rumors of another Marvel Comics team, where the characters are strong enough to support their own standalone movies before being assembled. We've heard rumors that a Defenders movie is in the works as one of Marvel Studios future movies, likely in late Phase Three or Phase Four. While almost every major Marvel property seems to have movie rumors these days,  here's the evidence why we believe that a Defenders movie is actually part of the plan. The founding and key members of The Defenders are Doctor Strange, Prince Namor, and the Hulk. Marvel definitely owns the rights to Doctor Strange and the Hulk, and it is believed that the rights to Prince Namor reverted from Universal back to Marvel last year. We have heard from multiple sources that a Doctor Strange movie is definitely in the works for Marvel Studios Phase Three. In fact, both Kevin Feige and Stan Lee have confirmed as much in a number of interviews. Another character which has frequently been reported as part of Marvel Studios Phase Three is the Hulk. Marvel Studios didn't sign Mark Ruffalo to a six picture deal for no reason. Another standalone Hulk movie is on the way sooner rather than later, and the Hulk is a character who could bring the Avengers audience with him if he made the leap to The Defenders. In a report earlier this year, Empire Magazine also listed Prince Namor The Sub-mariner as one of the characters that they felt would be launched in Phase Three. There have also been a couple references to Atlantis in previous Marvel movies, hinting that Prince Namor is a part of Marvel Studios future. If Marvel Studios releases standalone Doctor Strange, Hulk, and Prince Namor movies as part of Phase Three, they will have started to build an audience around these characters, which could help recreate the magic of The Avenger if they are brought together in a team. The fourth member of The Defenders was Silver Surfer, whose rights are currently owned by Fox. When Fox was about to lose the rights to Daredevil, a report surfaced that Marvel Studios had offered to give Fox an extension on the Daredevil rights if they could get back the rights to use Galactus and Silver Surfer in future movies. Of course, the deal did not go through, and Marvel Studios got the Daredevil rights back. However, a Defenders movie would certainly explain why Marvel Studios wanted the rights to Silver Surfer back. Even without the Silver Surfer though, Marvel Studios still owns the movie rights to plenty of characters who could fill out The Defenders roster. In fact, Daredevil eventually became a recurring member of The Defenders, so he's another character strong enough to support a solo movie that could join the team. Another character that could be in the mix for a Defenders movie is Black Panther, who has also been rumored for a Phase Three solo movie. Given the success of Thor, it wouldn't be hard to imagine Valkyrie being part of the team as well. One other possibility might be Ant-Man. Ant-Man is the only movie that has been officially confirmed as part of Phase Three. And even though Henry Pym (Ant-Man) created Ultron, Joss Whedon has revealed that he is not part of the upcoming Avengers: Age Of Ultron movie. In describing the Ant-Man movie, Kevin Feige said, "It will of course be firmly planted in the MCU, but a different corner than we've seen before." Why would Marvel Studios be keeping Ant-Man out of the Avengers sequel? We think the answer is because they are creating him as a quirky character, which they see as fitting better as a member of The Defenders. The fact that Warner Bros. is developing a Justice League Dark movie likely hasn't gone unnoticed, and The Defenders could be Marvel Studios way of striking first with their own version of Justice League Dark.

Is Marvel Studios Assembling The Defenders After Avengers Trilogy?