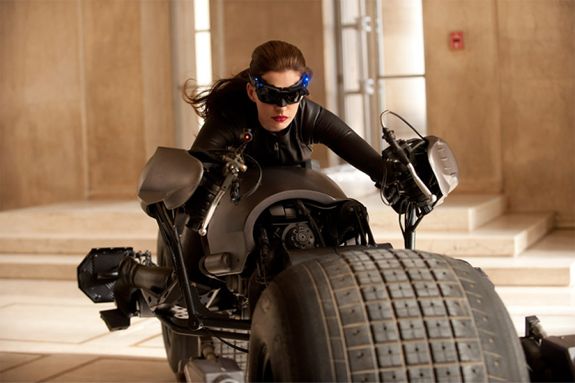 As a bootleg of the second trailer for The Dark Knight Rises has leaked online, it has provided some more clues about Anne Hathaway's role in the movie and possible plotlines. The first trailer and The Dark Knight Rises prologue focused on Bane, so there has been much debate over how large a role Anne Hathaway's Catwoman character will play in the movie. The second trailer provides the most extensive footage of Anne Hathaway to date, which provides more insight into her character. In the second trailer Anne Hathaway as Selina Kyle can be seen dancing with Bruce Wayne at an upscale party. Selina whispers into Bruce's ear, "You really think this is going to last? There's a storm coming Mr. Wayne. You and your friends better batten down the hatches, because when it hits you're all going to wonder how you ever thought you could live so large and leave so little for the rest of us." Based on this brief dialogue, where Selina Kyle appears to be admonishing Bruce Wayne for living a life of style and elegance, one might suspect that Catwoman will be portrayed as almost a Robin Hood style character. Maybe, she doesn't give to the poor, but perhaps she justifies her stealing as only taking away from the rich, who don't deserve what they have. Other scenes from both trailers have shown a great deal of chaos. The massive armored vehicles give the feel that a war is taking place. Could part of the plot revolve around an uprising of the "have-nots" against the "haves"? Earlier this year, rumors surfaced that The Dark Knight Rises would include the Occupy Wall Street protesters in the film, as "a stand-in for something that already exists in the film." That rumor never came true, and Matthew Modine was quoted as saying it was because Christopher Nolan didn't want to do anything that "could potentially trivialize the situation downtown." Could including the Occupy Wall Street protestors also have hit too close to home on the movie's plot? After all, in the real world, Bruce Wayne would be part of the 1%. To explore how a wealthy Bruce Wayne is viewed in a time of civil unrest and economic uncertainty would be an interesting and timely plot element for Nolan to include in The Dark Knight Rises.