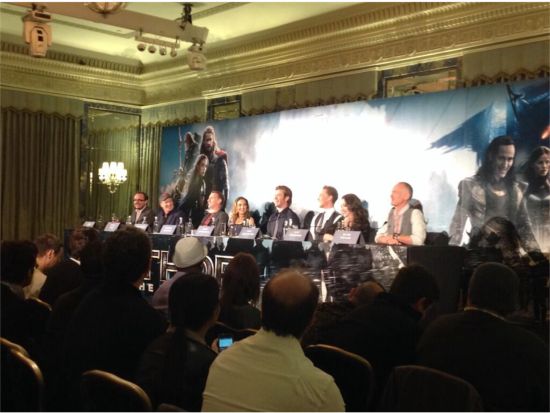 While Thor: The Dark World doesn't open in the United States for almost three more weeks, the film is opening early in some countries overseas. In fact, many in the British press have already seen an advance screening of the movie, and Thor: The Dark World spoilers are already flooding the Internet. While full reviews of Thor: The Dark World are reportedly embargoed until October 24th, some early feedback is already slipping out online. And for the most part, it appears to be positive. One thing we've heard is that film contains quite a bit of humor. Not the camp humor like in Batman & Robin, but the actually funny humor like in The Avengers. During a press conference that took place today in the UK, the humor in the movie was a big subject of conversation. As, the Marvel UK official Twitter wrote, "More comments from the audience about the comedy of the movie...possibly the funniest Marvel movie yet?" In regards to the humor, director Alan Taylor said, "The key to the Marvel universe is you're screwed if you don't keep it funny." Chris Hemsworth pointed out that the actors had a lot of laughs on set while making the film. Hemsworth said, "There's going to be some great DVD extras on this one." During the press conference, Tom Hiddleston was also asked about how Loki is becoming more loved than Thor. "Loki is defined by Thor. He's defined in opposition to him. They are ying and yang," said Hiddleston. "Loki is a mixture of playfulness and charm. But he's a bitter, grief stricken, angry lonely proud individual."

Is Thor: The Dark World The Funniest Marvel Movie Yet?