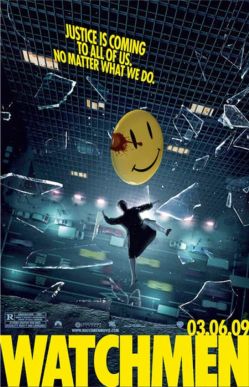 Remember when people wondered if the general movie-going public would believe a man could fly? Remember when there was a question about whether a Batman movie would be successful without the camp and without Robin? Remember when it took eight years for Hollywood to make another Batman movie after attempting to add Robin? Remember when it was a longshot that a second tier character like Iron Man could translate into big box office dollars? How far the comic book movie world has come that now an "R" rated comic book movie with no big name actors can open in March with the biggest opening of the year to date and be considered a flop by some. Just think about it, a couple of years ago, no one would have considered pouring huge money into making a comic book movie without a single big name actor. And while the Watchmen might be one of the best known superhero comic books among comic book fans, it is one of the least known superhero comic books among the general public to ever make it to the big screen. On the radio the other day, I heard a couple disc jockeys who had never heard of the Watchmen marveling over how some movie with a bunch of superheroes they had never heard of could have provided the biggest opening of the year so far. Yet, on many online entertainment websites, the Watchmen movie is being labeled as a flop because it failed to live up the high box office expectations set by previous comic book movies. Depending on the eye of the beholder, the Watchmen movie is either an unbelievable success or an overwhelming flop. Now, one of the screenwriters has even come forward and asked fans to go see the movie again during its second weekend of release. After the Watchmen opened on the low side of high expectations, many will judge the ultimate success of the movie on how well it does in its second weekend. Unfortunately, for the Watchmen movie, it will not be facing the pushover competition it faced in its opening weekend. For its second weekend, the Watchmen movie will be going up against the heavily promoted and family friendly Race To Witch Mountain. Even if Witch Mountain outraces the Watchmen, the Watchmen movie will likely still make a sizable profit for Warner Bros. While the movie did receive some negative reviews, most of the reviews from comic book fan sites were extremely positive. If a director's cut of the movie is released in theaters, which has been mentioned as a possibility, it could provide another boost to Watchmen's box office. Even if the director's cut doesn't make it to theaters, Watchmen fans will likely rush to buy the DVD version.

Is Watchmen A Box Office Flop?