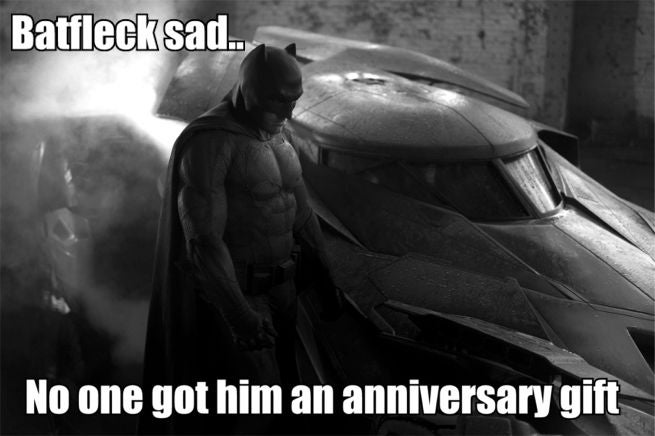 It was one year ago today that Warner Bros. shocked the world with the surprise announcement that Ben Affleck had been cast as Batman in the as-of-then untitled follow-up to Man of Steel. The news nearly broke the Internet, as outraged Batman fans turned to social media to voice their displeasure.

Even though Ben Affleck was fresh off a Best Picture Oscar win for Argo, there was no forgetting the travesty of Daredevil in 2003. Countless new memes were born, petitions were started, and it seemed like the whole world was demanding that Warner Bros. rethink a decision that could destroy Batman and potentially all of human existence.

Now, it's a year later, and the Internet has calmed down considerable. There are still those that won't completely have faith until they see Affleck on the big screen, but from the photos released so far, Affleck certainly fits the look of Batman.

How will Warner Bros. mark the momentous occasion of the anniversary of adding "Batfleck" to the nation's vocabulary? Could Warner Bros. be planning another surprise for August 22? Dwayne "The Rock" Johnson certainly has been rather chatty lately?

We'll have to wait and see. But for now, today is a day for recalling and remembering that fateful day one year ago when Warner Bros. forever changed the lives of Batman fans around the world.