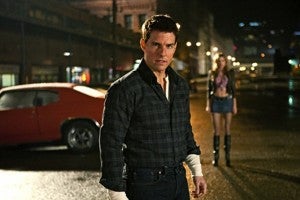 Earlier in the week, the first theatrical trailer for Jack Reacher hit the Internet--which was all well and good, excepting the fact that it was made for the international market and all of the movie's dialogue had been dubbed into Russian. It may, then, have been a good sampling of director Christopher McQuarrie's visual style but offered little in terms of an idea of what the movie might actually be about for those of us who haven't read all of Lee Child's best-selling novels. Now, though, the cinema gods have smiled upon we simple folk and a version of the trailer is available in English, where we get to see the camera shaking and Tom Cruise being intense in our own native tongue. Based on One Shot, the first of Child's many Jack Reacher novels, the film stars Tom Cruise as the titular ex-Marine. That's a move that has frustrated many of Child's fans, given that Cruise is not exactly a physical fit for the imposing Reacher of the books. It will hit theaters in February 2013.