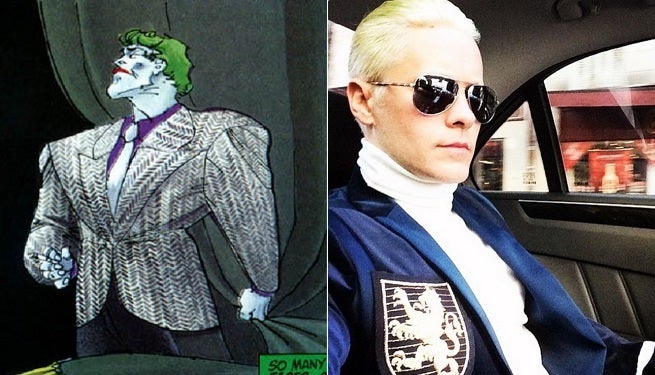 Some rumored new details about Jared Leto's Joker in Suicide Squad, as well as another character who may be appearing, have surfaced online.

Latino Review scoopster Umberto Gonzales reports on Instagram that the Joker in Suicide Squad will be based heavily on the Joker from Frank Miller's The Dark Knight Returns. This seems consistent with DC Cinematic Universe's vision of the Batman mythos as a whole, since everything we've seen of Ben Affleck's Batman so far seems to rely pretty heavily on Miller.

Gonzalez also reports that Leto's Joker will be slight, but fit, with bleached – not painted – skin and scars running over his body. There's also a lot of reference to the Joker's past crimes in the film, which include the murder of one of Batman's sidekicks.

Lastly, the reports that one of Batman's oldest enemies, the psychiatrist Hugo Strange, will be appearing in the movie. Strange, a little known villain from the comics who made a bigger splash in the Batman: Arkham City video game, will be shown serving as the Joker's psychiatrist. Whether he gets involved in the Suicide Squad's doings beyond that remains to be seen.

The report also mentions that there will be plenty of interplay between Joker and Harley Quinn for fans to look forward to.