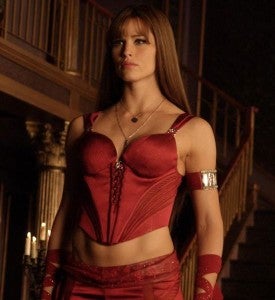 Given the massive outpouring of controversy over Ben Affleck's hiring to play the role of Batman, one would assume that the filmmakers had to put a lot of consideration into whether he was just right for the role, and that Affleck himself would have to spend about as much time thinking whether to take it. After all, he's famously been quoted as saying that the mask in Daredevil did him no favors and that he wouldn't be in a hurry to put one back on. According to Alias and Elektra star Jennifer Garner, though (who's married to Affleck), the actor was apparently confident that he was doing right here. ET Canada caught up with the actress and asked her what she thought about her husband taking the coveted role, and she seemed to suggest that it was an easy decision. "I'm excited about Batman, of course," Garner said. "Everything we do, we look at it together, and we say, 'Can we handle this? Can we take this?' And this was one where we were like, 'Let's go to Michigan!'" Michigan, of course, because the film is being primarily filmed in Detroit.