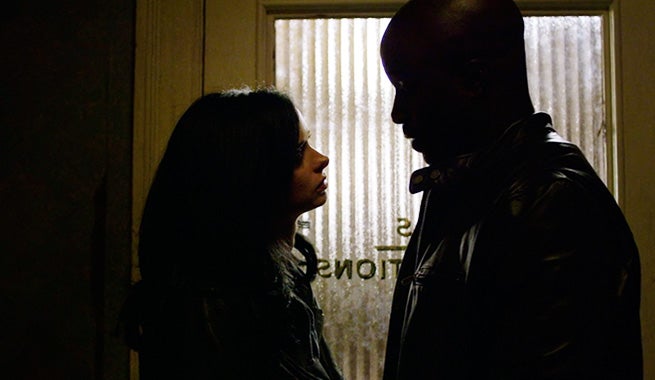 A man describes the feeling of freedom that comes with being under Kilgrave's control.

Malcolm and Jessica discuss Kilgrave and his powers. Malcolm suggests pooling information about Kilgrave because his powers aren't magic and they can work together to stop him. Luke knocks at the door. He says he wants to "hire" Jessica but Malcolm is skeptical. He threatens to kick Luke's ass if he tries anything but Jessica dismisses him. Jessica tells Luke she'll give him another P.I.'s info but Luke wants her. He starts explaining the story of Antwon Greer. He got in deep with a loan shark. He took money from his sister to pay it back but didn't pay it back. Jessica questions Luke's motives, quoting him on how he only protects what's his. Jessica wants as much info as she can get on Anton. They shake hands and Luke leaves. The phone rings - it's Hogarth. Jessica tells her she has no dirt on her ex but Hogarth called to tell Jessica that Hope was attacked.

Jessica meets Hogarth outside the prison. Hogarth bribed a guard for info and Jessica gets the info, thinking the woman, Garcia, who attacked Hope was Kilgraved. Hogarth leaves and Jessica goes inside the prison. Jessica meets Garcia in the visiting room and gives her money for the vending machine. Jessica finds her there and pins her against it, threatening to take her hand off if she touches Hope again. Garcia tells Jessica Hope paid her to beat her up.

Jessica meets Hope in the infirmary and questions why she paid Garcia to beat her. Hope reveals she is pregnant. The doctor won't see her for two months. Hope won't wait that long because every second the baby is there she is raped again and her parents are shot again. She won't give life to this baby she calls a "thing."

Jessica sends a picture to Kilgrave when he requests it. He is sitting in a restaurant looking at houses on his computer and yells at the crowded place to be quiet. They do. He reviews the pictures she sent so far.

Jessica enters a building as a man in a car watches her. She walks into an apartment and searches it. Someone makes noises in a back room and she's startled to see it is Luke. He looks through paperwork as Jessica breaks down why she believes Antwon packed up and left. Luke wants to find him because he keeps his word. Jessica goes through the trash can and finds lottery tickets. She calls Antwon and leaves message, telling him he's a winner and has to call back to claim it.

Outside, Jessica and Luke encounter the loan shark. Luke wants to strike a deal to find Antwon. Jessica gets 5% finder's fee and they all part ways. Luke offers Jessica a ride home on his bike. He hands her a helmet and they ride off. They arrive and Luke asks what's next - with Antown - and she tells him she's going to do some digging before heading inside. Malcolm approaches Luke and questions Luke's interest. He doesn't want Jessica to be hurt. Luke tells Malcolm not to get attached. Luke asks about Kilgrave.

Jessica calls Hogarth and asks her to meet her at the prison tomorrow morning. Pam revealed she wants to spend the rest of her life with Pam, her receptionist, and gives her a ring. Pam insists Hogarth finalize her divorce first.

Luke knocks on Jessica's door. She tells him to go home. He says, "I know about Kilgrave" and explains that he knows what he did to Malcolm and her. He brings up how he shut her down when she tried to open up about it and thinks that's why she left but she says it isn't. He wants to "make it right." She opens the door and tells him he can't make it right and he didn't do anything wrong. She belittles herself. Luke steps inside. He assures her, whatever happened, it was Kilgrave, not her. She kisses Luke, passionately.

The next morning, the two lay in bed together. Luke admires her and says he is just thinking. She puts a shirt on but Luke poses for her and gets her back in bed. He asks if she's going to go after Kilgrave and tells her she doesn't have to do it alone but she insists that she does. He has to say something but her phone rings and it's Antwon. She requests an address to deliver the Xbox today. Jessica tells Luke that unless Antwon had a Puerto Rican accent, this wasn't him, and he must be in trouble. Luke reveals that he doesn't know Antwon, or his sister for whom he claims to be keeping his word, all that well. He is doing this to try to find proof of his wife's death not being an accident which startles Jessica. Jessica claims the woman has no proof, she's just taking advantage of Luke's stregnth. Luke tells her that after Riva died, he found an envelope with instructions to go to where Riva died. He did and dug where it said something was buried.

Flashback. Jessica digs a whole with an axe. Riva and Kilgrave look on. Her hands are bloodied. Jessica opens a box with a small yellow USB drive inside of it. The three go outside and Kilgrave orders Jessica to take care of Riva.

Now. Jessica is concerned about what proof the woman has. Jessica rushes to the bathroom to send a picture of herself to Kilgrave. Luke knocks on the door and he's leaving. Kilgrave responds, "You're late. Don't let it happen again."

Jessica walks down the hallway and Malcolm compliments Luke. She tells him not to look out for her. Malcolm went to the support group. Jessica says she isn't going to talk about her story because there is always someone who had it worse. Malcolm tells her it isn't a competition.

Jessica gives Hope a pill and warns her of the side effects and Hope doesn't hesitate to take it. Jessica tells Hogarth to stay with Hope and in turn, she'll ensure her ex signs the divorce papers.

Kilgrave knocks on a man's door and compliments his home. The man questions what Kilgrave wants and Kilgrave wants to buy the house, which is worth $600,000. Kilgrave starts to tell him that he wants to sell the house but instead, shows the man a bag of $1.2 million and offers it to the man for the home. He has a real estate agreement drawn up and tells him he has to be out of the house by end of day, tomorrow.

Jessica hurries to pursue Antwon. Luke shows up with coffee. They're both early. They spot their man and start to follow him. He is dropped off at a warehouse. They ride into the lot and Luke says it is a good place to hold a guy prisoner. Jessica rips the lock off the door and they enter. They find a greenhouse growing weed and Luke says, "Sweet Christmas." A pair of guard dogs approach. Luke takes over, saying sharp teeth is kind of his specialty. Their man walks out to yell at the dogs and Jessica grabs him, demanding information about Antwon. She throws him aside and finds Antwon organizing bags of weed. She escorts him out and the lloan shark tries to cut them off. Jessica offers all the weed for her to keep Antwon but he won't renegotiate. Jessica and Luke dispatch of all of the loan shark's men but the shark goes after Antwon. Luke grabs him and starts taking on two men. It looks like he might be in trouble but he literally turns the tables and fights the men off.

Jessica delivers Antwon to his sister, Celina. Jessica demands Celina give her what she promised Luke. Luke enters and tells Jessica, "I guess I should get used to you bailing me." He grabs the folder with the evidence in it and Jessica tries to convince him not to open it. He does anyway and he looks her. He sees that the bus driver, Charles Wallace, was drunk and blames him for killing Riva. Jessica asks him if it's done and he nods before walking out. Celina reveals to Jessica that Charles Wallace is still driving the same route because the MTA covered up the truth about the accident.

Luke rides the bus. He stares at the driver. The bus empties and Luke is the last one onboard. The driver tells Luke it's the last stop and Luke approaches him, asking, "You know who I am?" He has no idea. "How about Riva Conners?" The driver is saddened and he apologizes. Luke grabs him and throws him through the window. Jessica rushes to his aid and tells Luke he can't kill the driver. She tries to hold Luke back and free the bus driver but Luke shoves her aside. The bus driver is able to make it away.

Jessica cries out, "Charles didn't kill your wife!" before pausing. "I did," she reveals. He doesn't believe her. She explains that Kilgrave and her brought Riva to the warehouse. Kilgrave manipulated Riva into giving her the USB drive before telling Jessica to kill Riva. He forced her to do it. Luke pushes Jessica against the bus. Jessica tells Luke she hit Riva and killed hit. She was dead before the bus got there. Luke cocks back and punches the bus. "You slept with me," he says. "I didn't plan that. It just happened," she tells him. He tells her she made him think he could get past it, asking if Kilgrave forced her to do that. He is shocked, saddened, and insulted. He asks if she would've ever told him the truth and a crying Jessica doesn't respond. "I was wrong, you are a piece of shit," Luke says before walking away.

Malcolm talks to the support group about his problems stemming from Kilgrave. The problems make him question himself and who he really is.

Hope struggles in her bed. Hogarth gives a nurse a request to collect the dead fetus and deliver it to her office.

Jessica recites the street name which she grew up on over a bottle of whiskey in her empty apartment.

Kilgrave takes the keys to his new house and dismisses the man who sold it to him. He inspects the place, running his hands along the walls. One wall catches his attention and he inspects it, closely. He peels back the wallpaper and reveals height markers for Jessica at different ages. This is the house she grew up in. Higgins Drive. Birch Street.

Jessica Jones Recap With Spoilers: AKA You're A Winner