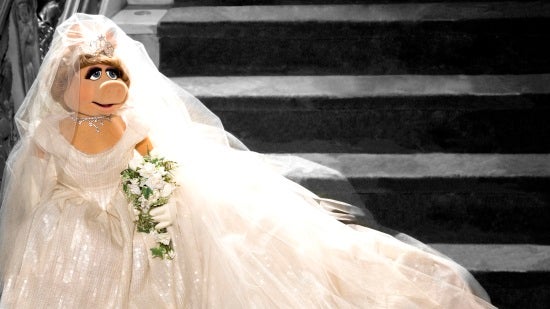 Most of the celebrity press got pranked last night when Joan Rivers left the QVC Red Carpet Style event in a huff after having cake smeared all over her face and dress. To her credit, Rivers did a great job of acting like she was really upset by someone having put a cake in her face, but it should have been suspicious right from the start that no one saw the caking. Today, a video showed up on YouTube, which revealed the culprit behind Joan Rivers run in with a cake. The video shows Joan Rivers and Miss Piggy getting into a fight at the QVC pre-Oscars party.  Rivers makes a quip about "half-backed ham," and Missy Piggy responds by chanting "plastic surgery" over and over agan. As Miss Piggy goes to leave, Joan Rivers stops her, which leads to a shoving match between the two. Eventually, the dispute ends with Rivers landing face first in a nearby cake. A great piece of viral marketing for both QVC and the upcoming Muppets Most Wanted movie. Muppets Most Wanted is scheduled to be released in movie theaters on March 21, 2014.