Technology, Entertainment and Design (TED) host talks annually that have brought out such luminaries and Bill Gates, J.J. Abrams and Bill Clinton in the past. The speeches are generally made available online, but none have been more widely praised and shared on social media than this week's talk by Andrew Stanton, the director of Disney's John Carter (which hits theaters today). In the talk, titled "My Life In Story, Backwards," Stanton tells people that the key to storytelling is to make the viewer (or reader, whatever) care about the characters so that they're invested. It's a great talk, worth checking out, and lots of folks in the comics industry--from Ron Marz, who has been a bit John Carter-centric of late, to Brian Michael Bendis--have retweeted the link and recommended it to fans. 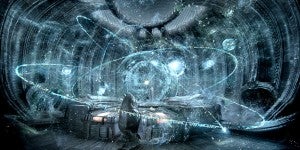 On the other side of the breakwall between fiction and reality, fans this week were treated to a viral promotional campaign for Ridley Scott's upcoming release Prometheus--widely reported to be a prequel to his hugely successful Alien franchise--in which clues unlocked on a website led fans to a fictional TED talk from the future. That talk was made by Sir Peter Weyland, played by Memento star Guy Pearce in what appears to be the first video from (or at least derived from) Prometheus, a project which Scott has been trying to keep under wraps to prevent major spoilers. The talk appears to be the first step in a viral campaign to promote Prometheus, something that has worked very well for genre films like The Dark Knight in the past and which has also been latched onto by Sony's The Amazing Spider-Man recently. Whether the two clips was intentionally released now instead of later to capitalize on people talking about this year's TED talk is unclear, but the cumulative effect has certainly left a fair number of people who didn't know what the organization was or did before, talking.