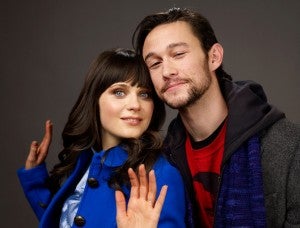 Pretty much just what it says on the package: The Dark Knight Rises star Joseph Gordon-Levitt and his (500) Days of Summer co-star Zooey Deschanel have recorded a silly song for fans and posted it to Deschanel's YouTube account last year at this time. Since JGL wasn't on our radar nearly as much this time last year as he was in 2012, it seemed a worthwhile thing to share now that it's getting a ton of viral traffic again. Below you can see the video, and the caption that goes with it, from Deschanel. That's two minutes and some change of hipsters with high voices just for you, our readers. Happy New Year.

I have known Joe Gordon-Levitt for going on 12 years. We first met in the summer of 2000 while doing a tiny movie called Manic, where we bonded over a mutual appreciation for Harry Nilsson and Nina Simone and I have been lucky enough to call him one of my dearest friends ever since. When we did 500 Days of Summer 8 years later, we spent every lunch hour dancing to Marvin Gaye in the hair and make up trailer; we had loads of fun. I hope to do a thousand more movies with him because he's simply the best. But in the meantime, we made a little New Year's duet for all of you! The original by Nancy Wilson. ENJOY! Don't forget to check out Joe's website https://hitrecord.org/ New Girl is back January 17 (my birthday) !

This year, Deschanel's show returns on January 8. Looper, which stars Levitt, will be out on video Tuesday.