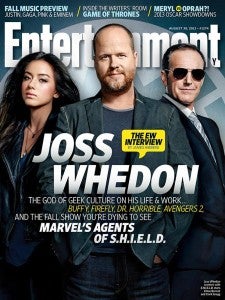 Director Joss Whedon isn't known to be shy about killing off characters in his movie and television projects. In fact, Whedon actually teased "death, death, and death" for the Avengers sequel during a recent question and answer session. As part of a lengthy interview in the current issue of Entertainment Weekly, Joss Whedon addressed if he could actually kill off a Marvel icon. Whedon said, "I'm always joking about that. Um...maybe?" Whedon added, "But I'd have to have a really good reason, a really great sequence for [Marvel executives] to go, 'We'll cut off a potential franchise, that's fine!' They know as any good studio does, that without some stakes, some real danger, how involved can we get? We don't just rule it out across the board, but neither is the mission statement 'Who can we kill?' We try to build the story organically and go, 'How hard can we make it on these people?' You go to the movies to see people you love suffer-that's why you go to the movies." Judging from Whedon's answer about "cutting of a potential franchise," it's probably likely that characters like Captain America, Thor, and Iron Man with proven franchises are pretty safe. However, with characters like Hawkeye, Quicksilver, and Scarlett Witch that Marvel doesn't appear to be developing as standalone franchises, there's no telling what Whedon might do. Avengers: Age Of Ultron is scheduled to be released in movie theaters on May 1, 2015. Check out the full interview with Joss Whedon in Entertainment Weekly, which is currently on newsstands.

Joss Whedon On Maybe Killing A Marvel Icon In Avengers: Age Of Ultron