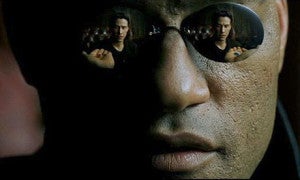 As part of an ongoing feature at the popular review-aggregator site Rotten Tomatoes, Marvel's The Avengers director Joss Whedon shared his five favorite movies with the site, commenting on a handful of releases including just one science-fiction movie: 1999's The Matrix. The film starred Man of Steel's Laurence Fishburne as well as Keanu Reeves, who played in a 1993 version of Much Ado About Nothing, a film which Whedon recently remade and for which he was doing the "Five Favorite Movies" interview as promotion. "It is storytelling that is so unexpected and brilliant as to seem inevitable, and that's the best kind," Whedon said of the film. "I wanted to put down my pencil and back away until I learned how to write when I saw this movie. Structurally, it's insanely sound. Everything that they're doing is visually ecstatic, and philosophically it could be studied for centuries. It contains every aspect of modern life and religion and philosophy and knows it, and they're doing something that is very deliberately very heady. But at the same time, when asked what is this movie about, their answer was 'It's about kung fu versus robots.' If it was just that, it would be on this list. But it's that and everything else." Other films included on the list are Once Upon a Time in the West, The Bad and the Beautiful, The Court Jester and Magnolia. The latter starred Guardians of the Galaxy's John C. Reilly and Spider-Man 2's Alfred Molina alongside Tom Cruise, Philip Seymour Hoffman, Julianne Moore and more. "We're back to opera, we haven't left it -- because Magnolia," he said. "If you think about the moment Keanu wakes up as a battery, the moment Lana Turner loses it in traffic and is in this insane hysteria of flashing lights that is completely unrealistic, and then you look at the moment where it's raining frogs. I saw it, and was like, "Is this going to be one of those movies that I don't like where he looks down on every one?" I think Alexander Payne and Todd Solondz are super talented, but sometimes I don't want to sit through their movies because the bile is just unbearable. I didn't really know PT Anderson's work that well, or what was going to happen. And then, it turns out he loves people so hard that it rains frogs. There is actual opera in this one. Oh, and BT-dubs, there is a musical number. The license and the observation and the amount that he went for it. The craft and his ability to sustain that much -- any one of these movies could have fallen into a puddle of pretension, but the mastery behind them meant that they never could. Jason Robards, who happens to be in two of the movies on this list, him actually dying of actual cancer playing a guy dying of cancer, giving that speech. And Tom Cruise giving the best performance he'll ever give. It just felt so achingly, weirdly logical to me."

Guillermo del Toro's Pinocchio Gets a Wave Of Funko Pops

James Cameron Speaks Out on Directing Superhero Film After Avatar: The Way of Water (Exclusive)