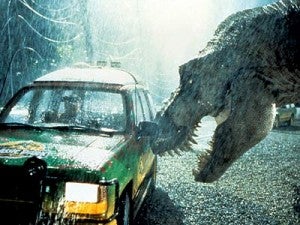 This year has only had a single $1 billion movie--Iron Man 3--at the global box office, but a strong opening in China this weekend saw Jurassic Park cross the rarely-surpassed barrier. That's right, folks--Jurassic Park's 3D reissue finally made its way to China, and the result was a $6 million opening weekend that helped the 1993 film cross $1 billion all time, according to Universal Pictures, who distributed the film. Colin Trevorrow, director of Safety Not Guaranteed and reportedly a onetime candidate for Star Wars Episode VII, is in pre-production on a fourth installment of the blockbuster dinosaur franchise, which is set to hit theaters in 2015.