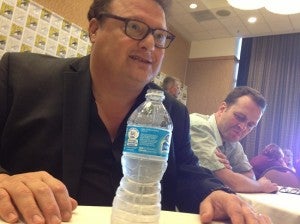 During a meeting with the press yesterday following his TV Land Legends of Comedy panel at San Diego Comic Con International, Seinfeld and Jurassic Park star Wayne Knight said that he always thought the dinosaur probably wouldn't have finished eating his character, Dennis Nedry, and that he'd like to come back in a future installment of the popular franchise showing his wounds but very much alive. He said that while he didn't have any investment in Jurassic Park's 3-D reissue since the actors didn't see any revenue from it, "My feeling is that it was a small dinosaur and a big meal. Me with one arm and an eyepatch? Why not?" He added, "I would think that halfway through it, he would go, 'Oh, that's enough.' I might have survived!" The veteran actor, who used to play a range of roles, told reporters that after Seinfeld he was essentially typecast as weasels and jerks. That, he doesn't mind so much--you can't escape Seinfeld, he said. But every now and again, he does tire of the "Hello...Newman!" comments that he gets in real life. "46.2," Knight said when asked how many times a day he hears someone deliver Seinfeld's famous line to him. "It's the point two that really piss me off!"

Jurassic Park's Wayne Knight Wants to Come Back For Sequels...Kind of