Ever since it first became common knowledge that Warner Brothers is trying to quietly develop a big-budget feature film based on the DC Entertainment Justice League franchise, fans have wondered if it will happen, if it will be any good...and what they might make it about. With rumors circulating this week that the central premise is borrowed from a 1980 story long since deemed non-canon by the DC Comics powers that be, we thought we'd take a look at five of the most obvious choices for Justice League starting points, in terms of what might work on screen. The New 52: Origin 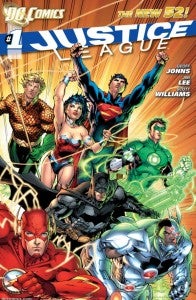 This one seems to have been written with the big screen in mind. The first issue was all Green Lantern and Batman--two characters who are already established with the moviegoing audience. The problem? The Green Lantern movie tanked, and tanked pretty hard. It's not particularly well-liked or well-remembered by fans, either, and the "breaking news" of a sequel in an advanced stage of development was poo-pooed almost immediately by one of the supposed writers of the film in question. (It's also possible, given Jim Lee's slow work pace and the rumors that he and writer Geoff Johns had been working on this book on and off for quite a while before the New 52 was launched or conceived, that the story was dreamt up before they knew that the Green Lantern film wasn't going to be widely considered a success.) This remains one of the most easily accessible film versions, and certainly you could gloss over Green Lantern's involvement in the opening act, especially once Superman shows up. It looks so far as though Henry Cavill's Man of Steel is set to be a fan favorite, if audience enthusiasm and a couple of great trailers are anything to go by. It isn't always, of course, but we'll leave that for another discussion. In any event, the Green Lantern problem is a real one, but it's not unique to this film. Almost every story on here would have to deal with reintroducing Green Lantern and deciding whether or not to acknowledge the events and continuity of a movie widely considered to be one of the highest-profile bombs of the last five years. This is also one of only two films on the list that features Darkseid, widely rumored to be the film's villain. And while this week's rumors of a very specific source material for the movie have been met with skepticism, the Darkseid idea is pretty much accepted by most who hear it. 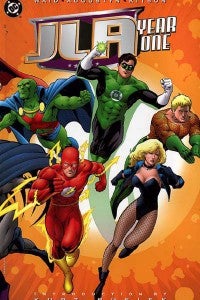 JLA: Year One Mark Waid and Barry Kitson's terrific reinvention of the early days of the Justice League took the basic skeleton of some of the Silver Age stories that seemed so dated and silly at the time and updated them for the late '90s, incorporating things like the Justice Society of America along the way for good measure. It's an easily accessible story with a small cast, and both Batman and Superman play only small roles, keeping them mostly off the table so that they don't soak up all the screen time. That's great, but Wonder Woman is non-existent in the story, which would be problematic for non-comics readers who would expect her to play a major role. Of course, Black Canary could be excised to make way for Wonder Woman. It would make sense, given that we're just waiting on her to appear on The CW's Arrow...but wouldn't that be something? Retconning out Black Canary to make room for Wonder Woman? What a role reversal. 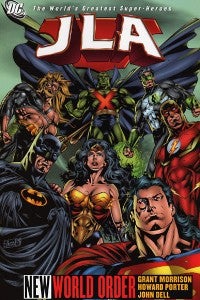 New World Order The first arc of Grant Morrison't critically-acclaimed, best-selling and fan-favorite run on JLA is another alien invasion tale (aren't they all?), but with a bit of a twist--it really plays up the importance of J'Onn J'Onzz, the Martian Manhunter (or "Manhunter" as he'll be known beginning in February with a backup feature in Justice League of America). This is another good way of getting some non-Trinity character s into play, but it also incorporates Batman, Superman and Wonder Woman so that there isn't quite as much rewriting needed in order to promote the company's most valuable brands. That, of course, is the balancing act that the success or failure of a Justice League movie will hang on. With only Superman and Batman having had successful movies in the recent past, the temptation will be to let the film revolve around them--and then it becomes "World's Finest and Friends." The rest of the League will be relegated to also-rans. One of the key successes of the Marvel Cinematic Universe is that having had an Iron Man film blow everyone away before The Avengers ever went into development meant that the team-up film was in far less danger of becoming Captain America and His Amazing Friends. Here's another question--if you base this movie on a Morrison-era story, do you just skip right over Hal Jordan and go with Kyle Rayner? That would allow the absence of any backstory relating to the Green Lantern film to roll right off a lot of people. 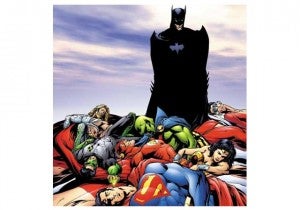 Tower of Babel Another Waid story, this one written in the immediate aftermath of Morrison's glorious run on JLA. In one of the most popular stories of the JLA era, Ra's Al Ghul steals Batman's files and uses them to wage war on the Justice League, with Batman's own brilliant schemes for how to take out his friends in case of emergency put into play. Certainly this one works well in that it explains why a dude with no powers might be an important and useful component on a team that features a Kryptonian, a demi-god and a Green Lantern. Still, there are problems with using this particular tale. First of all, Ra's Al Ghul has already played a pretty substantial role, pretty recently, in the Nolan Trilogy. He's not The Joker, either; there are probably a fair number of casual fans who think he was a creation of Christopher and Jonathan Nolan. Using him right away will just take people right back to those films, and draw unwanted comparisons between the franchises. It's the opposite of what they want to do. Also, the story has already been adapted into the short feature Justice League: Doom, a home video release that hit in early 2012 to middling reviews. 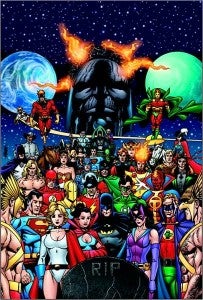 Justice League #183-185 Here's the thing: I could buy that this is the central conceit of the film, but not that any attention was paid to anything beyond the concept that "Darkseid is coming and he wants to blast Earth out of orbit and replace it with his own planet." But if that's the case, why use Darkseid? You could use Mongul and Warworld just as well and save Darkseid for a story only he could pull off. That would even sidestep the issue of trying to compete in 2015 against an Avengers sequel that stars a knock-off version of your exact villain. Meanwhile, this particular tale, cited as it may be by Latino Review, is full of chaotic pre-Crisis on Infinite Earths madness that will never, ever make its way into a major motion picture. The DC Multiverse is just the START of the confusion in this story, with dozens of characters, a handful of duplicate (i.e., Earth-1 and Earth-2 verions of) characters and a bunch of New Gods concepts vying for attention. All that said, if they actually tried to make this film, and did anything resembling a faithful adaptation on any level, comic book fans would melt down. The rest of the world, though, would walk out halfway through. It would be insane--it would be like giving Justice League to David Lynch. Wait, there's an idea...!