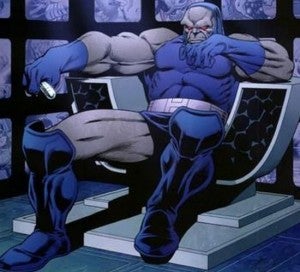 While the Justice League movie has yet to be formally announced by Warner Bros., there is already a report out claiming that the villain is Darkseid. According to the Latino Review, their sources have told them that God of Evil and the ruler of Apokolips will face off against the members of the Justice League. There have been rumors circulating for a while now that Darkseid would be the Justice League movie villain, but most of the rumors seemed to have been just fan speculation that he would be the obvious choice. In addition to revealing the villain, Latino Review is also reporting that no director has been named yet and shooting will start next year. Of course, Latino Review states this is all subject to how the Man of Steel performs in summer 2013. If Warner Bros. is waiting on Man of Steel results that could be cutting it close to get the Justice League movie in theaters by the rumored 2015 release date. Disney already has a director and most of the cast locked in place for Avengers 2 and is rapidly moving forward on Star Wars Episode VII, which are also due in theaters in 2015. Also, Thanos is rumored to be the villain for Avengers 2, which is a very similar type character. If the rumors are true, it will be interesting to see how the general public reacts to both the Avengers and the Justice League fighting what will probably be perceived by many as the same villain.