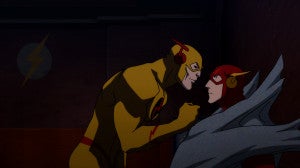 Tonight at San Diego Comic Con International, about 4,000 fans will be on hand for the world premiere of Justice League: The Flashpoint Paradox. Warner Bros. Home Video have released the image at right and the clip below to celebrate the big coming-out party for the film, which will be available on Blu-Ray, DVD and digital download later in the month. When time travel allows a past wrong to be righted for Flash and his family, the event's temporal ripples prove disastrous, creating a fractured, alternate reality where the Justice League never formed, and even Superman is nowhere to be found. Amidst a new world being ravaged by a fierce war between Wonder Woman's Amazons and Aquaman's Atlanteans, Flash must team with a grittier, more violent Batman and government agent Cyborg to restore the continuity of Flash's original timeline. Come for the film, but stay for the star-studded panel that features Justin Chambers (Grey's Anatomy), C. Thomas Howell (Southland), Cary Elwes (The Princess Bride), Sam Daly (The Daly Show) and possibly a few surprise guests, plus the filmmaking team of producer James Tucker (Superman: Unbound), director Jay Oliva (Batman: The Dark Knight Returns), dialogue director Andrea Romano (Batman: The Dark Knight Returns), screenwriter Jim Krieg (Green Lantern: The Animated Series) and character designer Phil Bourassa (Young Justice). Moderator Gary Miereanu will add to the fun with a special announcement of the 2014 DCU movie slate, as well as exclusive, cast-autographed prizes for a few lucky fans. Based on the landmark mini-series by Geoff Johns & Andy Kubert, Justice League: The Flashpoint Paradox will be available as a digital download on July 19, 2013 and a Blu-ray™ Combo Pack on July 30, 2013.