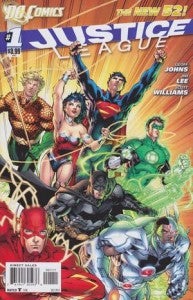 Lest anyone wonder whether Justice League: The Flashpoint Paradox will have a measurable impact on Warner Home Video's DC Universe animated feature film division, here's the announcement many fans were half-expecting: Justice League: War, a new direct-to-video feature film coming in 2014, will bring the New 52 to your DVD, Blu-Ray and streaming video services. ".@Comic_Con eve reveal - 1st 2014 DCU animated film is Justice League: War based on @geoffjohns @JimLee #ScottWilliams JL Vol 1: Origin," announced Gary Miereanu, the PR rep who does the DC animated movies. That arc sees the League coming together as they battle Darkseid's hordes. Jason O'Mara will play Batman and Shemar Moore will be Cyborg; more casting is sure to be announced throughout the day, but it's certainly interesting to see Batman go to someone who isn't Kevin Conroy. Could this be a new direction for the DC Universe in the wake of a New 52 movie? Or is it just a scheduling conflict, and Conroy will resume his decades-old job for the next film? After all, it isn't the first time they've gone to a different Batman for a movie or two. World's Finest Online report that Michelle Monaghan is voicing Wonder Woman, Christopher Gorham is The Flash, Alan Tudyk will portray Superman and Justin Kirk is Green Lantern. Jay Oliva, who most recently worked on The Dark Knight Returns and The Flashpoint Paradox, will direct.