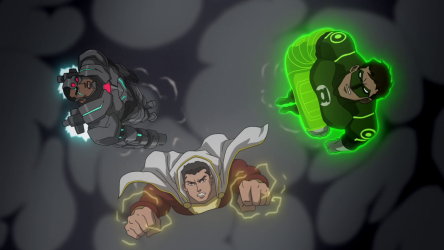 Warner Bros. Animation have released the first official box art and descriptions of the forthcoming DC Universe animated movie Justice League: War. You can see an image from the film above, and the cover art and official description below. The film is due on Blu-ray, On-Demand and DVD February 4th and, if previous experience is any guide, will be available on a number of digital formats two weeks before that. Based on Geoff Johns and Jim Lee's first Justice League arc in the New 52, Justice League: War pits the team against Darkseid and his army of Parademons in a mix of an origin story and alien invasion tale--similar, in its way, to the way the team came together in the previous DC Universe animated movie Justice League: The New Frontier. Except with Darkseid, who was rumored to be the Big Bad in the most recent draft of a Justice League live-action feature. 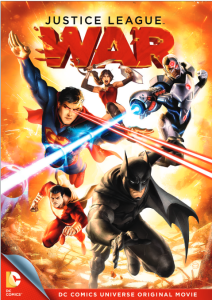 When the powerful Darkseid and his massive, relentless forces invade Earth, a group of previously unaligned super heroes – misunderstood and, in some cases, hunted by the authorities – discover the only way to fend off the attack will be to work together as a cohesive unit. Batman, Superman, Wonder Woman, Green Lantern, Flash, Shazam and, in his origin story, Cyborg combine their respective talents in an all-out battle to save the planet. Based on the 2012 graphic novel, "Justice League: Origin," by Geoff Johns & Jim Lee, JUSTICE LEAGUE: WAR provides a glance into the world before the Justice League was created, and offers the initial animated incarnation of DC Entertainment's "The New 52."Produced by Warner Bros. Animation and DC Entertainment, Justice League: War features the voices of Jason O'Mara (Vegas, Terra Nova), Christopher Gorham (Covert Affairs), Justin Kirk (Weeds), Alan Tudyk (Suburgatory, Serenity, Firefly), Michelle Monaghan (Mission: Impossible III), Shemar Moore (Criminal Minds), Sean Astin (LOTR films), Bruce Thomas (Army of Darkness) and Steve Blum (Justice League: The Flashpoint Paradox). Producer is James Tucker and director is Jay Oliva from a script by Heath Corson.