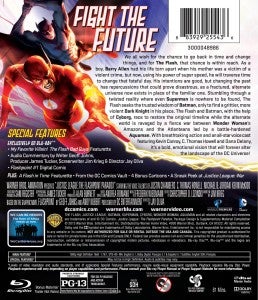 This is one of those rare rumors that, barring some serious (and seemingly pointless) Photoshop work, you can consider most likely true. After Justice League: The Flashpoint Paradox, Warner Bros.will return with another new Justice League feature film in their DC Universe line of animated feature films, titled Justice League: War, World's Finest Online reveals. The rumor comes from the image at right, which appears to be a scan of the back of the packaging for The Flashpoint Paradox. Included among the special features is a sneak peeek at Justice League: War. Customarily, the sneak peek in the DVD features is at the next DC Universe film. With a vague title and no art, it's impossible to guess what comic book story, if any, the film might be inspired by. Recently, producers associated with the DC Universe line have suggested that they're interested in exploring more original material and pulling back a bit from adapting specific comic book stories. Warner Bros. wouldn't comment on the film, with a rep simply telling ComicBook.com that the DC Universe slate will be announced at San Diego Comic Con International in July.

Spider-Man: No Way Home Director Jon Watts Was Worried They Wouldn't Finish the Movie Because of COVID-19