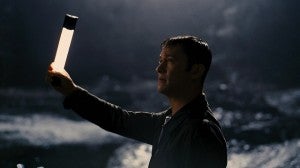 This is going to be one of those stories that gets written in a more casual, conversational, personal tone than most. It's inevitable because, frankly, I personally find the rumors that Joseph Gordon-Levitt will play Batman in Justice League to be so implausible that I would calculate the odds against as pretty insurmountable. Still, the actor hasn't taken to Twitter to discount the claims in the last twelve or so hours and he's expressed a willingness, "if the script was right," in the past to return to the DC Universe. And it seems as though Warner is similarly unwilling to discount the reports, even off the record, as we have places like Time magazine running reports today based on the same rumors we reported last night. So let's assume, for the sake of rather far-fetched argument, that JGL is in line to play Batman in the film. Okay--but what Batman? So far, everyone in a position to know has been saying that Man of Steel will roll out a new DC Universe, with the Nolan Bat-fiilms and Green Lantern fading into memory and a new approach to the characters beginning this summer when Henry Cavill and friends hit the theaters. Those rumors had come along with the assumption that Bruce Wayne would be Batman. He is, after all, the only Batman that most casual fans know and anyone but him having the job would be a distraction with the hardcore fans who Warners really need to support the movie after a handful of high-profile failures based on DC Entertainment properties in recent memory (Catwoman, Superman Returns, Green Lantern, Jonah Hex...even Watchmen was a disappointment). For Levitt, of course, the seemingly-natural direction to take would be to make John Blake (JGL's character from The Dark Knight Rises) into Batman, since that was the direction his character seemed to be pointed anyway. Movie studios constantly underestimate their audience, and it's likely that Warner Brothers will have a hard time imagining that fans coming off more than half a decade of the Nolanverse will readily accept Gordon-Levitt as someone else, even if they're told those movies "don't count." That position is bolstered by the notion that the report also claims there will be a second carry-over from the Christopher Nolan Batman films. The obvious choice would be Commissioner Gordon, although what role he might play in any movie not set in Gotham is unclear. Then again, that's true of any of the characters from Nolan's incredibly Gotham-centric trilogy of films. In any event, bringing another player from The Dark Knight Trilogy into Man of Steel or Justice League to star alongside JGL as Batman seems as though it's just asking for "brand confusion," so to speak, if the Nolan films weren't canon and JGL wasn't playing Blake. Then again, there are some members of the Nolan Batman cast who may be swayed to join the DC Cinematic Universe more easily than others. There are many who are beholden to Christopher Nolan, and who have said candidly that they're not interested in a return trip to Gotham without the filmmaker being directly involved -- but as Sony and Marc Webb have discussed the possibility of bringing back the fan-favorite J.K. Simmons as J. Jonah Jameson for sequels to The Amazing Spider-Man, perhaps it's not totally out of the realm of possibility that we could see JGL as Batman, most of Gotham re-cast, the continuity rebooted...but Morgan Freeman staying on as Lucius Fox or Michael Caine as Alfred, each of whom would be somewhat more logical to have on-hand for ANY Bruce Wayne story, even if he were out of town for a while with the League.