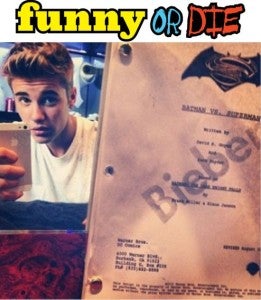 Funny Or Die might have just pulled off their best viral promotion for a new video ever. Both Justin Bieber and Batman are trending on Twitter, and it's all due to a teasing post that Justin Bieber made on Instagram. Bieber posted a photo of himself with a script for Batman Vs. Superman, along with a hint that he might be up for the Robin role. The Internet instantly exploded with outraged fanboys on one side and Beliebers on the other side. While comic book fans expressed worry about the end of days on Twitter, Beliebers have backed Bieber's Robin post with over 600K likes on Instagram. While it's still unknown for sure what 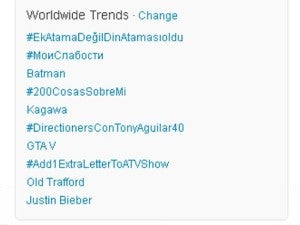 the reason is behind Beiber's post, most speculation is pointing to it being a Funny Or Die prank. Before Bieber shocked the world with the possibility of playing Robin, he tweeted, "Off to do something funny or...die : )" Whether you're a fan or Justin Bieber's or not, you've got to respect the fact that the singer appears to have pulled off one of the most epic pranks of all time. Maybe, instead of playing Robin, The Joker would be a more appropriate role for Bieber.

Justin Bieber In Batman Vs. Superman: Funny Or Die’s Greatest Gag Ever?