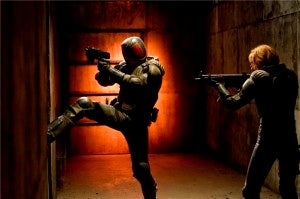 Karl Urban, who starred in both Star Trek Into Darkness and Dredd 3D, has become one of the more popular franchise builders in the last few years. Or at least it seemed that way, until Dredd stalled at the box office and a sequel looked all but impossible. Now, though, the actor says things are looking up, thanks to home video sales that have the studio looking at their options and those involved with the film actively pushing for more. "It's certainly my hope that we get to make more," Urban told reporters at San Diego Comic Con International yesterday. "Clearly it has found an audience. The home video sales for Dredd just went through the roof. I think it sold 650,000 units in the first week." Urban, a big Judge Dredd fan, stayed true to the comics and never took off his helmet in the film, something that had been a major sticking point for long-term fans when Sylvester Stallone starred in a much more popcorn-y version of the character in 1995. "It's amazing how these things occurred. Not to compare it directly to Blade Runner, but when Blade Runner came out it was a film that didn't necessarily do what you thought that it should have done at the box office. I feel the same way about Dredd. The reviews were overwhelmingly fantastic but for whatever reason it didn't do the box office numbers that it should have." He said that, with something where the studio wants to do more but isn't sure they can afford it, it might be up to the fans to make some noise and assure the producers that they will buy in. "I think the more people that campaign for it, the more people that email, Twitter and write into Lionsgate and say 'We want to see more of this,' then the more likelihood is that we'll get to see that," Urban said. "We certainly are doing everything we can to ensure that happens." A comic book that serves as a sequel to the film is expected from 2000 AD in the fall.