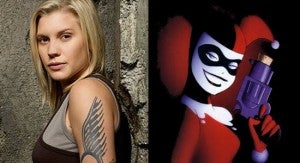 It's hard to believe now but there was actually a time when big name actors and actresses were reluctant to appear in comic book movies because they didn't want to be typecast as a specific superhero or villain. Now, everyone in Hollywood is clamoring for roles in superhero movies, and even willing in some cases to make big sacrifices to land a coveted role. Katee Sackhoff is no stranger to comic book and sci-fi fans. She is perhaps best known for playing Captain Kara "Starbuck" Thrace on the Sci Fi Channel's TV series Battlestar Galactica. She's also done voice work for such animated shows as Star Wars: The Clone Wars, Robot Chicken, and The Super Hero Squad Show. In a new interview with Esquire, Sackhoff was asked if there were any comic book movie roles that she might be interested in. Sackhoff said, "I love Harley Quinn. I do. I just love it. It's not been done before. It's this fantastic mix. I mean, it's like the female Joker. Who wouldn't want to do that? Quite potentially — it's not around so I wouldn't feel the weight of it — I'd probably sell my first born at this point to do that." With the Batman Vs. Superman movie in the works for 2015, there's always the possibility that Harley Quinn could pop up on the big screen. Would you like to see Katee Sackhoff as Harley Quinn?