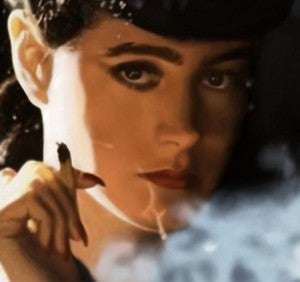 As part of her promotional tour in support of The Smurfs 2, which opens tomorrow, pop star Katy Perry told Metro (via CBM) that she would like a role in one of science fiction's most iconic franchises--and one that's on its way back to the big screen soon. "With films, I hope to win you all over with animation and then do other films. I am really interested in comedy," the singer-turned-actress said when asked what future roles she'd like to play. "And I would really love to play Rachael in Blade Runner 2 if Ridley [Scott] would just call!" Michael Green, one of the writers of Warner Bros.'s widely-panned Green Lantern movie, is rewriting the script for the as-yet-untitled sequel to Blade Runner, the studio confirmed today. Green is punching up a draft by Hampton Fancher, who wrote the original. While producers haven't yet confirmed that it will be an actual sequel, per se, the fact that Ridley Scott will return to direct the film and has expressed interest in bringing Harrison Ford back as Rick Deckard certainly suggests that's the case.