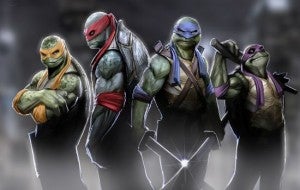 In an panel at the Phoenix Comicon, Teenage Mutant Ninja Turtles co-creator Kevin Eastman answered a couple questions about the upcoming Teenage Mutant Ninja Turtles reboot. The reboot came under heavy fire from fans when producer Michael Bay initially announced that the Teenage Mutant Ninja Turtles would be aliens. At one time, the film was also rumored to have been retitled as just Ninja Turtles, but recent reports have suggested the film will be called Teenage Mutant Ninja Turtles. After a fan expressed concerns about Michael Bay's involvement in the film, Kevin Eastman said, "He's been nothing but amazingly respectful, and Jonathan Liebesman's been the director." Eastman continued, "I've seen the script. I've seen the design of the characters. It's fantastic. The story has all the right turtleisms. They're in the sewers. I'm very excited to see the movie." Eastman also added, "My conversations with the director on the fight scenes is like, he said, "We want to do something better than like Raid: Redemption." Eastman even added that Paramount's mentality was that they wanted to do it like The Avengers. And what about the controversial turning of the Turtles into aliens? Well, Michael Bay already went on record that he misspoke and that the Turtles would not be aliens. However, just in case there was any doubt, Kevin Eastman gave a strong one word response when asked if the Turtles would still be aliens. Kevin Eastman simply said, "No."