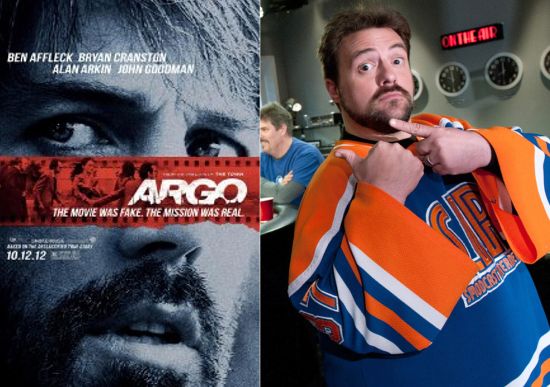 The feel good story of the Oscars was Ben Affleck winning an Academy Award for Best Picture after being overlooked for a Best Director nomination. As a member of the Academy, one might have suspected that Ben Affleck's pal Kevin Smith would have voted for Argo for Best Picture. However, in an interview on the Opie & Anthony Show, director Kevin Smith revealed that he didn't vote for Ben Affleck's Argo. Kevin Smith told Opie & Anthony, "I loved it [Argo], a friend of mine made it, but I'll be honest with you my favorite movie of the year was Life of Pi. I thought it was beautiful. It's crazy beautiful." However, Kevin Smith didn't vote for Life of Pi either. Kevin Smith revealed, "I abstained from voting this year, because #1 it was tough, I had two people I dearly loved up for awards, man. I love Affleck, and I love Quentin Tarantino. And me in the middle, I loved Live of Pi, so I just abstained from voting altogether at that point." Kevin Smith added, "Also, part of the reason was there were a bunch of movies that I didn't see and didn't see until the end. So like that one's thing they ask you to do like if you haven't seen all the flicks just don't go in there and be like 'I like this one better than this one' unless you've seen them all."

Hocus Pocus 2: Another Original Star Not Returning for Sequel