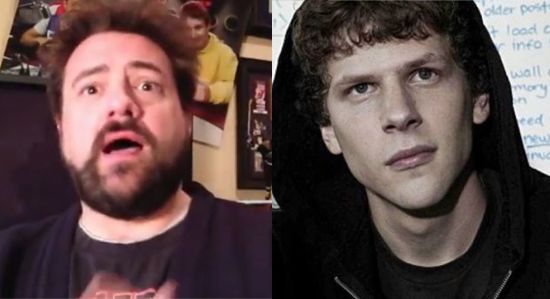 When Warner Bros. announced that Ben Affleck had been cast as Batman, one of the first celebrities to voice their support was director and fanboy Kevin Smith. In fact, Smith described the news as "the greatest thing that ever happened." Smith said, "I'm happy, because I've been on record many times saying I think Ben Affleck can be anything he wants. He can act in anything. I think he's an amazing actor. He could even play the shark in a Jaws remake." When Kevin Smith hosted a Man of Steel Blu-Ray fan event, director Zack Snyder gave Smith a peak at a photo of Ben Affleck in the Batman suit. Once again, Smith expressed his fondness for where the movie was heading. Smith said, "I instantly bear hugged him. He was happy with that. You have not seen this costume in a movie on film before. It is…and for a comic book fan it was mindbending." With Warner Bros. latest announcement that Jesse Eisenberg has been cast as Lex Luthor, it has once again divided the Internet. So where does Smith stand on the latest casting news? After the announcement, Smith tweeted, "JESSE EISENBERG is playing Lex Luthor! JEREMY IRONS is playing Alfred! Loving the BATS Vs. SUPES casting so far!"