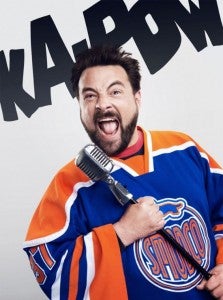 Remember when Kevin Smith announced that Clerks 3 would be his last movie as a director ? Well, it will still be his last movie, but it's just now that he's decided to slip a horror movie in first. During a podcast, Kevin Smith told Scott Mosier about a website listing where "a homeowner offers a living situation free of charge – the only caveat being the lodger would have to dress like a walrus from time to time." The story goes that the homeowner was lost at sea with a walrus as his only companion, and he wanted someone dressed as a walrus to remember the best time of his life. One thing lead to another and pretty soon Kevin Smith had come up with the basic idea for a horror story called The Walrus & the Carpenter. Smith quickly completed an eighty page script based on the idea, but he changed the title to Tusk.  He sent the script to Blumhouse, and Jason Blum of Blumhouse said he was in. Because Clerks 3 is currently being reviewed by the Weistein Company so they can decide if they want to be involved, things came together where it made sense to shoot the Tusk movie first. Smith is planning to start a twenty day shoot on Tusk in Los Angeles in September, and he hopes to have the film ready for Sundance 2014.