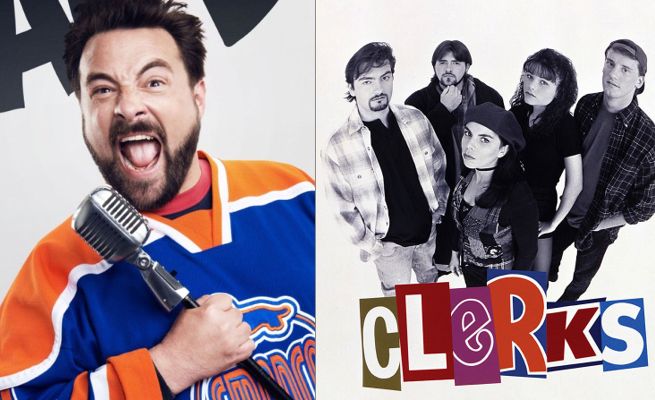 The film, made for around $25,000, launched Smith's career and was for a time the most profitable film in Disney's history (by percentage, not dollars), generating around $3 million in its domestic theatrical run.

The movie would attract serious attention; it was distributed by Miramax during a period in time where it seemed they could do no wrong with the indie crowd, having released, among others, the first few films by Quentin Tarantino. According to the film's commentary track, Smith was approached about doing a more mainstream version of the film -- in color, with famous actors. Instead, he sold the producer who had inquired about it Mallrats, his second feature, while Buena Vista Television went ahead with a Clerks pilot which never aired, and Smith wasn't involved in...

Clerks might never have made it to prime time in live action, but it did spawn a short-lived animated series that featured, among others, Alec Baldwin and Bryan Cranston in guest appearances. There were numerous comic books and a feature-film sequel.

It would also launch Kevin Smith's career in Hollywood, bringing him out of the Quick Stop where he had filmed the movie and putting him in a place where, by the end of the '90s, he had made four of his own movies and written a screenplay for an aborted Superman feature film at Warner Bros.

Meanwhile Smith, a comic book fan, would make subtle and not-so-subtle links between each of his films, creating an interconnected cinematic universe long before Marvel brought the idea into vogue for big blockbusters:

Clerks III, though, is expected to go into production in the next six months or so. Riding high on the critical and commercial success of Tusk, he's able to make the film in the way he'd been saying he hoped to: out of pocket. At one point not long ago, Smith was talking about retiring from films altogether, but that plan never seemed to come together, since he was announcing new film projects all the time, putting off Clerks III, which he had briefly said would be his final movie.

Instead, eventually, he said that he no longer wanted to be beholden to studios and that, having accomplished much of what he hoped to in Hollywood, he would return to Clerks's guerrilla roots and only make movies if he could fund it, taking the financial risk onto himself and increasing his upside if the movies are successful. Twenty years on, Smith is back to being a truly independent filmmaker -- albeit with mainstream distribution and millions of dollars at his fingertips.

Not bad for a guy who used a car insurance payout and sold his comic book collection to fund his start.