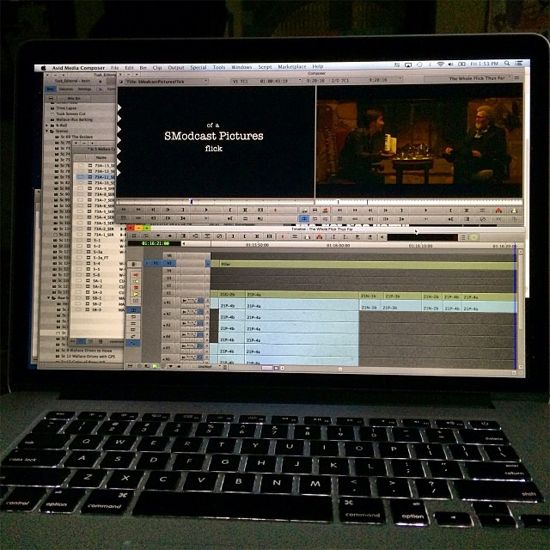 Director Kevin Smith has revealed a new production image from his upcoming movie Tusk. Earlier today, Smith posted the picture above to Instagram, along with the text, "Been editing only podcasts for so long now, I forgot how fun it is to cut movies! Thanks, @Avid! #WalrusYes." While most of the image is of Kevin Smith's editing equipment, there is a small frame from Tusk in the upper right corner. We've blown up the image and included it below. While the image is a little grainy, it appears to be the first production still that we're aware of that's been released showing Justin Long and Michael Parks. Smith previously released a design image of the Human Walrus. Tusk is a horror movie that was inspired by an online ad placed by a Brighton homeowner, who offered free rent to anyone who dressed up as a walrus for two hours a day. Justin Long is playing the roommate who is asked to dress up like a walrus, and Michael Parks is playing the landlord. Kevin Smith both wrote the screenplay for and is directing Tusk, which recently completed filming in North Carolina. The film is scheduled to be released sometime in 2014.