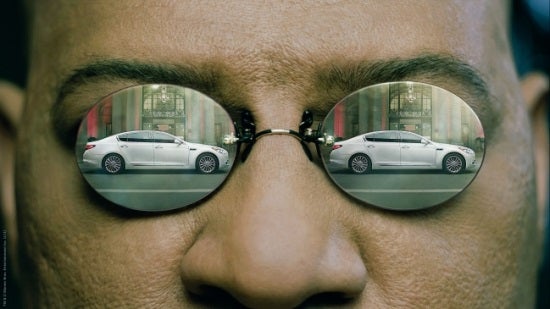 Laurence Fishburne has returned to the role of Morpheus from The Matrix Trilogy as part of a multiplatform marketing campaign by KIA for the new K900 luxury sedan. The commercial, set to premiere during the Super Bowl's third quarter, has Fishburne donning his iconic sunglasses and trench coat and speaking almost familiar lines like "Take the blue key, you go back to the luxury you know. Take the red key, and you'll never look at luxury the same again." The ad campaign is meant to channel The Matrix's exploration of reality versus perception, starting with the 60-second Super Bowl ad, in which Morpheus takes an unsuspecting couple on a ride filled with nods to The Matrix. Once he's done showing them "what luxury looks like" he lets them know "what luxury sounds like" with a booming rendition of "Nessun dorma," an aria from Giacomo Puccini's opera Turandot. "Kia has always been willing to challenge the status quo, and starting with our Super Bowl commercial we are out to dispel the notion that tradition and history are what makes a luxury sedan – we invite those with an open-mind to take a look at the all-new K900 and form an opinion of their own," said Michael Sprague, executive vice president of marketing & communications, KMA. "The K900 offers something modern and different for the growing number of people who don't want to be confined by the traditional definitions of luxury, and returning to the Super Bowl for the fifth straight year allows us to send a clear signal to TV's largest audience that something different is going on at Kia." In addition to the Super Bowl ad, the campaign will find its way into television, film, digital, print, experiential and social media, all drawing heavy influence form The Matrix films, using levitation cars, authentic costumes and props and a recreation of "The Construct" that can be seen in the 90-second extended cut at KIA's website. The 2015 K900 V8 luxury sedan is set to go on sale this spring.