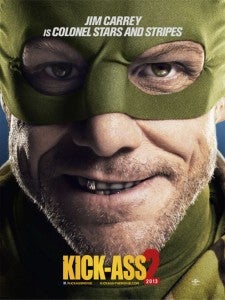 director Jeff Wadlow has waded into the Jim Carrey controversy, saying that he doesn't blame the superstar actor for distancing himself from the film in the wake of Connecticut's Sandy Hook Elementary tragedy, but that he hopes audiences will see the film and judge it for themselves. Speaking with the Associated Press, Wadlow called Carrey "fantastic in the movie," and said that he would work with the actor again if the opportunity arose, but added that he thinks the new film is actually less centered on gun violence than was its precursor, with hand-to-hand combat being more of a focus of much of the film's action. "You never know what he is going to do or say," Wadlow said of Carrey, whom he said is just as "unpredictable" in life as he is onscreen.