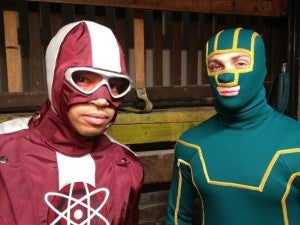 Jeff Wadlow, the director of Kick-Ass 2: Balls to the Wall, tweeted a pair of photographs earlier tonight that represent the first official look at Kick-Ass and Dr. Gravity, as well one of Mindy (Chloe Moretz) with a gun. Aaron Johnson's Kick-Ass is of course not a whole lot different from the last time around, but this is the first appearance of Dr. Gravity, played by Dr. Turk--err, I mean Donald Faison, of Clueless and Scrubs fame. Wadlow also said that the team would meet next week in London, and bid farewell to Toronto, where they've been shooting for the last two weeks. 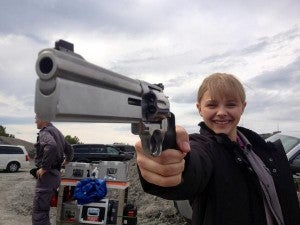 Is it too much to ask to see Hit-Girl punching out one of the Dark Elves while they're there? The film, based on the Marvel Comics series by the same name by Mark Millar and John Romita, Jr., will also adapt the Hit-Girl solo story for the big screen. It's shooting now, and is due in theaters on June 28, 2013.