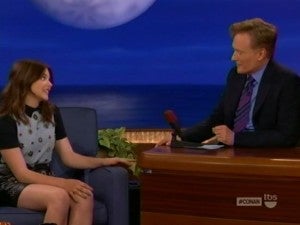 In an appearance on CONAN, Chloe Grace Moretz talked about her role as Hit-Girl in the original Kick-Ass and the upcoming Kick-Ass 2. When Conan O'Brien asked Moretz if fans tended to identify her with her role, Moretz revealed that was indeed the case. Moretz said, "Yeah, you know, I'm not going to lie. I was at a Paul McCartney concert about a year ago, and this guy was really drunk. And he came up to me, and he was like, 'Hey, man, are you Hit-Girl?'" Moretz continued, "And I was like maybe I lie and say I'm like from Arkansas and I'm visiting. And then he was like, 'Will you just punch me in the face?' And I was like, 'No, I'm not going to punch you in the face, but thank you for asking."" Kick-Ass 2 is set to be released in theaters in the United States on August 16, 2013.

Kick-Ass 2: Fan Asked Chloe Grace Moretz To Punch Him In The Face