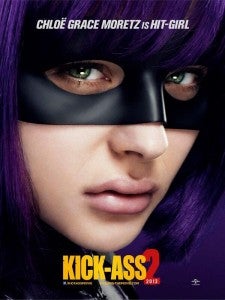 Universal Pictures have released a new look at their upcoming film adaptation of Mark Millar and John Romita, Jr.'s Kick-Ass 2, featuring Hit-Girl coming to the rescue of a plainclothes(-ish...?) Dave Lizewski, who's dressed conspicuously to attract the attention of a group of neighborhood thugs. Adapted from the comic book series of the same name, as well as the Hit-Girl miniseries, the film is set for release next Friday, August 16. Later this week, ComicBook.com will have an exclusive interview with Romita to discuss the film and other recent events since we last spoke to him in March. The next week of promoting the film should be interesting; one of the key components of the promotional campaign, actor Jim Carrey, has refused to promote the film, citing the violence against children in the film as a reason in the wake of the Connecticut school shooting earlier this year.