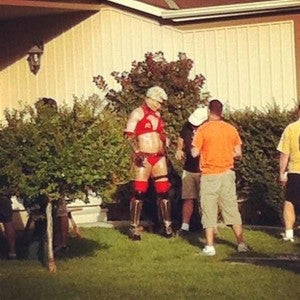 A handful of new set photos from Kick-Ass 2: Balls to the Wall tweeted out by on-set spies and collected by Comic Book Movie appear to give fans their first look at Olga Kurkulina's version of Mother Russia. It's a look that's different enough from the comic's interpretation of the character to raise some eyebrows in the comments thread, but cooler heads also note that while Red Mist's look was changed in the first film, it didn't materially damage the overall experience of the movie. Though the actress, who looks to be Kurkulina, is missing her tattoos (which could of course be added in post-production, or might just be painted on yet since they're only a few days into shooting) and has a different overall costume, she is wearing the cahracter's eyepatch, one of the defining elements of the costume from the Mark Millar-John Romita, Jr. series. There's also the distinct possibility that this isn't Mother Russia at all, but someone else, given the grainy quality of the photos, but so far the spies seem satisfied it's her. In any case, there's also some nice shots of the neighborhood. The film has been shooting in the Canadian city of Mississauga, Ontario all this week, but there's still some obviously-damaged New York Police Department cars kicking around. One of them either exploded or was raised into the air on a hydraulic lift, depending on whose story you believe, and there is what at least appears to be an extra dressed as a police officer (unless he's studio security, in which case he's missing something pretty obvious in the form of the guy taking photos six feet to his right) entering the neighborhood as well. Kick-Ass 2 is filming now for a release on June 28, 2013.