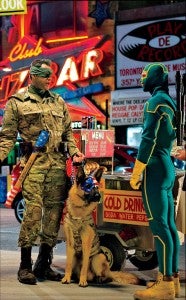 Jim Carrey appears as Colonel Stars, leading the superteam Justice Forever in the latest batch of set photos from the filming of Kick-Ass 2: Balls to the Wall, from Newscom. Aaron Taylor-Johnson as Kick-Ass, Lindy Booth as Night Bitch and Robert Emms as Insect Man also appear. The actor, a fan of the first film who dressed up as Kick-Ass and took to the stage with Conan O'Brien (who was in a Superman outfit at the time), has long been rumored for a part in the sequel but only recently confirmed that he would suit up.