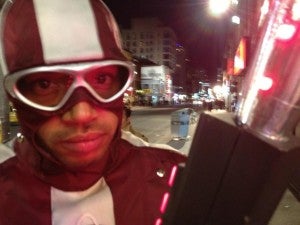 As part of a Reddit "Ask Me Anything" (AMA) interview conducted this afternoon, Donald Faison--star of Scrubs, Kick-Ass 2 and TV Land's The Exes--was asked what role would be a dream come true, if he could have his pick. Interestingly, he picked a role that could theoretically be back in play for one of the Star Wars spinoffs. "Lando Calrissian," Faison told Reddit. "Where else could I say 'Well well well, what do we have here?'" The quote, of course, isn't verbatim, but you get the idea. Faison will also be joining his Scrubs co-star Zach Braff, Scott Pilgrim Vs. the World's Mary Elizabeth Winstead and The Big Bang Theory's Jim Parsons in Wish I Were Here, Braff's Kickstarter-funded directorial follow-up to Garden State.