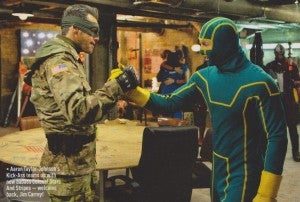 During an interview with SFX published today, Kick-Ass co-creator Mark Millar told the magazine that while there are plans to make a Kick-Ass 3, that will be the end of it. Asked whether, assuming Kick-As 2 is a success, a third movie was on his radar, Millar answered unequivocally, "Yeah absolutely. Kick-Ass 3 is going to be the last one though. I told Universal this and they asked me, 'What does that mean?' I said, 'It means that this is where it all ends.' They said, 'Do they all die at the end?' I said, 'Maybe' – because this is a realistic superhero story. And if someone doesn't have a bullet proof vest like Superman and doesn't have Batman's millions then eventually he is going turn around the wrong corner and get his head kicked in or get shot in the face [laughs]. So Kick-Ass needs to reflect that. There has to be something dramatic at the end, he cannot do this for the rest of his life." Recently, Millar registered a number of comic book-related trademarks on Justice Forever, the name of the team that shows up in Kick-Ass 2. Assuming that there are firm plans to do something with that title, it's unclear whether that will tie directly into Kick-Ass 3, be a spinoff to capitalize on the movie, or something else entirely. Kick-Ass 2 is due in theaters in June.

Kick-Ass 3 Planned, Will Be the Last Movie in the Series