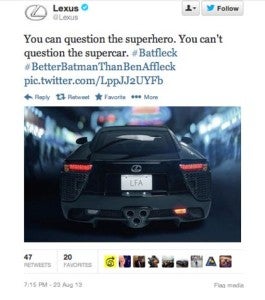 It's not unusual for brands to jump on the latest trend on Twitter in an effort to boost their marketing. With Ben Affleck being a trending topic for the last several days, whoever is running Lexus' official company Twitter account decided to weigh in with their thoughts. Lexus tweeted, "You can question the superhero. You can't question the supercar. #Batfleck #BetterBatmanThanBenAffleck." After Lexus took this little dig at Ben Affleck, several news sites picked up the tweet, while also pointing out that Ben Affleck has actually been known to drive a Lexus. In what is being labeled a marketing fail, Lexus essentially bashed one of their most famous customers. Guess Bruce Wayne probably won't be driving a Lexus in Batman Vs. Superman now? Lexus has since removed the tweet in question.

Lexus Bashes Ben Affleck As Batman, Removes Tweets After It's Pointed Out He Drives A Lexus