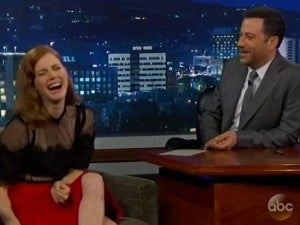 During Tuesday night's Jimmy Kimmel Live, Jimmy Kimmel told Amy Adams that there had been Superman fans camped out outside the theater since the morning. Amy Adams said, "That's awesome." However, Jimmy Kimmel asked, "Isn't that strange though? They haven't even seen you in the movie, and they've already grabbed onto you, and they will never, ever let you go." Amy Adams laughed, "Never, I know. I mean, no, it's cool. I think Henry is in for it, because he's really something." Kimmel added, "He's a very muscular guy. He must work out or something." After discussing Henry Cavill's physique, Jimmy Kimmel professed that he would like to be Lois Lane. Amy Adams responded, "You could probably pull it off, just get a wig." When Jimmy Kimmel suggested maybe he could be Lois Lane in the next reboot, Amy Adams suggested, "Maybe, there'll be a sequel. You could be like my…what is it….Bizarro Lois Lane." Kimmel added, "Yeah, Bizarro World Lois Lane, there you go. That would be Bizarro indeed." After watching a clip of Lois Lane talking to a handcuffed Superman, Jimmy Kimmel joked that he was swooning over Henry Cavill with no shirt on at the beginning of the movie. Amy Adams revealed, "No, my three year old daughter was swooning. Yeah, I think it's her first crush, which is really cute, because my first crush was Superman as well." When Adams revealed that her crush was on Christopher Reeve as Superman, Jimmy Kimmel revealed that his daughter's first crush was Tom Welling, who played Superman on Smallville. The Man Of Steel is scheduled to premiere in movie theaters in the United States on June 14, 2013.