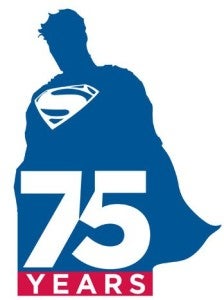 Warner Bros. announced today via The Hollywood Reporter's Heat Vision blog that Man of Steel director Zack Snyder will produce an animated short film for Superman's 75th anniversary. "Warner Bros. is privileged to be home to the global Superman brand, which has had an unparalleled impact on popular culture for 75 years," said Warners CEO Kevin Tsujihara, who is widely reported to be a big supporter of the DC brand. "We are proud to commemorate this milestone with exciting entertainment across the entire studio and across the globe, ensuring this enduring icon reaches new generations of audiences." A new logo, seen at right, was also unveiled to mark the occasion. The new logo will be used by all divisions -- DC Entertainment, Warner Bros. Pictures, WB Television, WB Animation, WB Interactive Entertainment, Warner Home Entertainment and WB Consumer Products – on Superman-related products and initiatives. "Superman is undeniably the greatest superhero in the world and likely the most influential comic book character of all time," said DC Entertainment president Diane Nelson. "In addition to being an enduring presence in pop culture for the last 75 years, he continues to be a commanding global icon." The blog reports that while details on the short are being kept under wraps for now, it will pay homage to decades of Superman on film and in print, and will feature contributions from the likes of Bruce Timm, Geoff Johns, Mike Carlin and Man of Steel storyboard artist Jay Oliva, who recently directed the feature-length animation Superman Unbound. Screen representations specifically singled out include Henry Cavill's Man of Steel depiction, Christopher Reeve's version from Superman: The Movie and the classic Max Fleischer animated shorts.