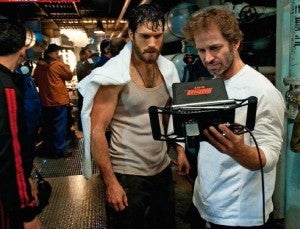 Without totally discounting the possibility of a Justice League movie coming to fruition soon, Man of Steel director Zack Snyder told Collider this week that he would have to think long and hard before taking the Justice League film, assuming it was offered to him, without first doing another Superman movie. "I feel like you need to get Superman a little further down the road before you can do a Justice League movie," Snyder said in the video interview embedded below. Just speculation here, but it seems likely to me that could be what gets announced at Comic-Con; while rumors have had the studio circling a 2015 release for Justice League, nobody is formally attached to the film at this point and word is the script that was commissioned didn't work. If Snyder were to force the issue by telling the studio he needed a second Superman movie before Justice League could take off, it could put Warner in a position to serve the film by rolling out one or two other DC properties between now and the release of Justice League.