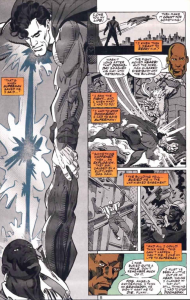 UPDATE: Concept art image removed at the request of the copyright holder.

The filmmakers behind Zack Snyder's upcoming Superman reboot Man of Steel have promised that the film sets a stage where other DC heroes could potentially appear, and we've already seen a few nods to the DC Universe (LexCorp and Booster Gold, anyone?) in officially-released material. This one's a little more iffy and maybe just a bit of wishful thinking, but if it's the first thing that sprang to my mind, it probably occurred to others, as well. A number of scans from Man of Steel: Inside the Legendary World of Superman have appeared online. The book, which provides fans with an inside look at the conception and production of the film, includes quite a bit of concept art and some production stills. One piece of production art, seen above, shows Superman and Zod fighting at what appears to be a construction site, where the bones of a skyscraper have been damaged in the battle. Fans will remember that back in 1993, shortly after the death of Superman, a quartet of new characters were introduced, each claiming to be Superman resurrected. One such character was an armored hero referred to as "The Man of Steel," later shortened to Steel. The character, John Henry Irons, was a Tony Stark-level genius who went into hiding after the government kept weaponizing everything he invented, and some of those weapons ended up in the hands of Washington, D.C. street gangs. Starting his life over again as a construction worker, Irons fell from a building very much like the one pictured, only to be rescued by Superman (see left). Following Superman's death, Irons emerged from the rubble of another construction site, this one having collapsed on top of him during Superman's battle with Doomsday, and swore to assist Superman in any way he could. When he learned of Superman's death, he became Steel. After Superman's return, Steel stuck around, becoming one of the most prominent black superheroes at DC, one of Superman's most popular supporting characters and a key part of Superman's "science team," along with Dr. Emil Hamilton (played by The West Wing's Richard Schiff in the film). Steel even got his own feature film--although people don't like to remember that one, as it starred Shaquille O'Neal as John Henry Irons, facing off against a villainous Judd Nelson. The fate of the world hinged on whether or not the character could make a free throw with a grenade. No, I'm not kidding. You can check out the '90s-tastic trailer below. Again, this is more or less baseless speculation, but if they did have the battle damage a building-under-construction and it didn't open up the possibility of John Henry Irons, it would seem like a missed opportunity.

Man of Steel: Does This Concept Art Hint at John Henry Irons?