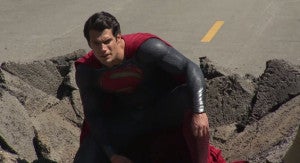 I'm very excited to see Zack Snyder's new Superman reboot, Man of Steel. In fact, one of our most popular stories over the last week or so is a list of twenty-five reasons why I'm excited for it. I'd have to say that something I didn't put on the list, but that sort of stands to reason, is the trailers. All of our looks at the film so far have been very promising; it's hit a lot of beats that I was hoping to see and given me a sense that writer David S. Goyer and company really get what makes Superman tick. But now, we're looking at three theatrical trailers, eleven TV spots and two different behind-the-scenes featurettes...at least! That's a lot and, even in a long movie, that's a lot of footage to be out there floating around. Frankly, it doesn't bother me. Having worked in the entertainment press since I was 19, I'm largely immune to the effects of spoilers since I know the ending to about 80% of all the movies I see, before I see them. I can't avoid it, because once the news breaks, I get a bunch of e-mails. In any event, it might not affect me that Warner Bros. has elected to show the audience about a half an hour's worth of footage from the movie, but some fans have expressed concern about it. "Okay. Gotta stop watching any more Man Of Steel footage," wrote famed comics artist Kevin Maguire on his Facebook page last night. "I'm sold. I've got my tickets. Everything else is now spoilers." A number of our readers have echoed that sentiment, commenting whenever we repost a new trailer or TV spot that they've seen too much already and nothing will be left to surprise them. It's not unique, either to our site or to Superman, either; recently a group of theater owners have started a push to shorten theatrical trailers, saying that too many audience members are complaining that they've "seen the movie already" in the two-and-a-half-minute trailers that tend to "summarize" the film (this is especially a problem for kids' movies and such). On that last note, it's worth mentioning that trailers weren't always this way, and the fact that the "summary" trailer is the current trend will likely not change if they shorten trailers. All it will do is force editors to cut out those big, sweeping establishing shots and focus more on plot and character in the trailers; I virtually guarantee that if you take the 2:35 Superman trailer and cut it down to two minutes, you could do so without losing any important plot points. In any event, what is too much for you? When Marvel's The Avengers came out, they had new TV spots, new trailers, new scenes from the movie debuting daily for the week or so leading up to the film's release. With only two weeks to go until Man of Steel is in theaters, don't be surprised to see something similar from this.

Man of Steel: How Much is Too Much?